Western Digital has recently sent the all-new WD Red SN700 for us to review. This new drive was recently added to their line-up and was designed for high endurance, caching driving that helps accelerate NAS performance. WD built this drive with the idea in mind to support NAS environments 24/7 with applications always running. This drive was made for reliability and endurance up to 5,100 TBW (4TB model).

Western Digital has recently sent the all-new WD Red SN700 for us to review. This new drive was recently added to their line-up and was designed for high endurance, caching driving that helps accelerate NAS performance. WD built this drive with the idea in mind to support NAS environments 24/7 with applications always running. This drive was made for reliability and endurance up to 5,100 TBW (4TB model).

The WD Red SN700 is also highlighted by its fast system responsiveness and I/O performance, which is ideal for multi-user, multi-application use cases. Western Digital also claims that this drive will be able to “tame” the toughest SMBs projects. Meaning that it will be able to support anything from virtualization, collaborative editing, all the way to intensive database storage. WD also states that by adding the SN700, because of the caching on the device, it will easily handle multiple random workloads at once. 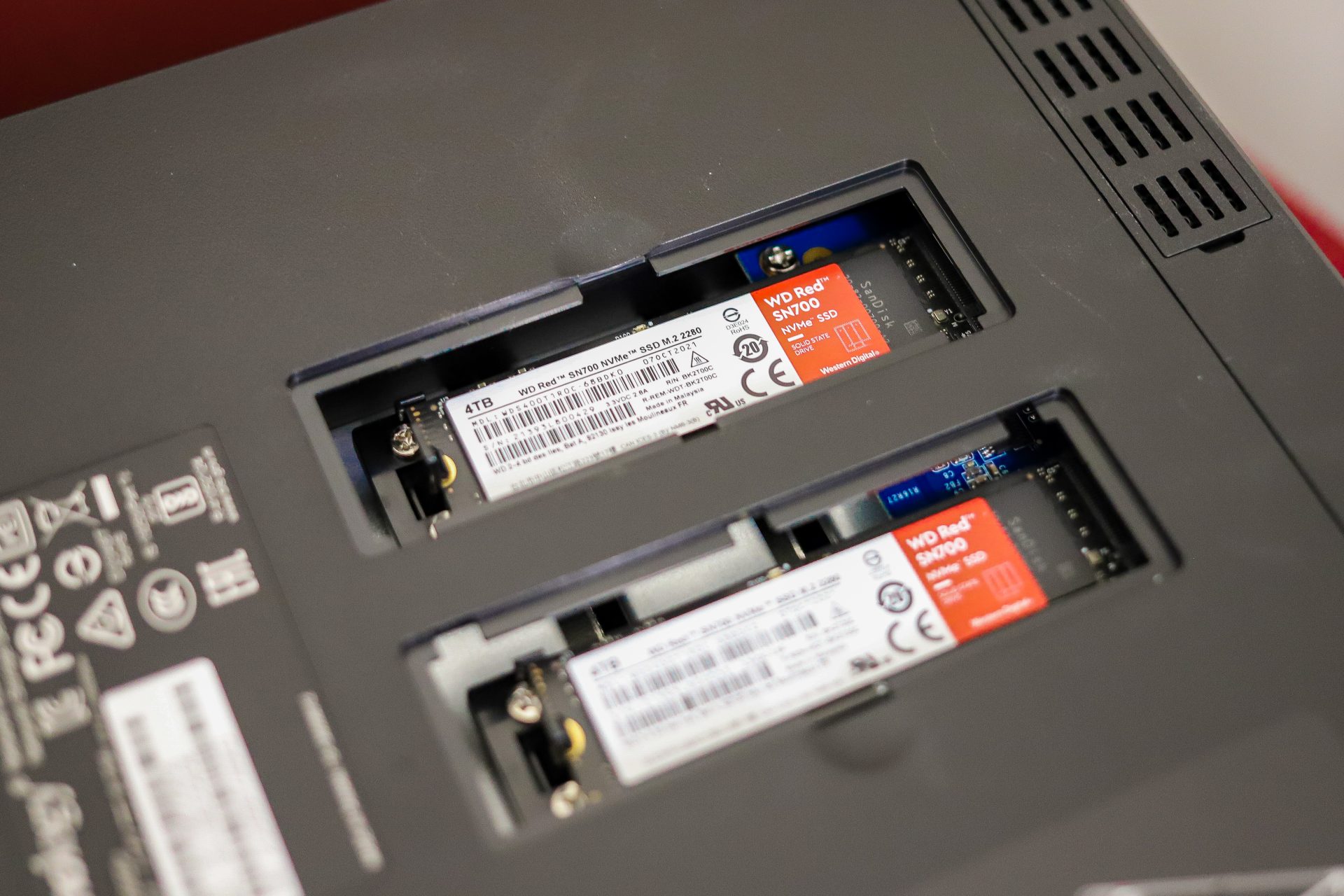 Systems from QNAP, Synology, and others that have NVMe acceleration bays or cards, will be able to take advantage of this new NVMe SSD. As seen in the picture above, many NAS models like Synology have easy-to-access cache drive bays on the bottom of the NAS. QNAP’s slots tend to be internal, as seen below. Not all M.2 slots are NVMe yet, however, so be sure to check with your NAS vendor before paying the NVMe premium when compared to SATA. 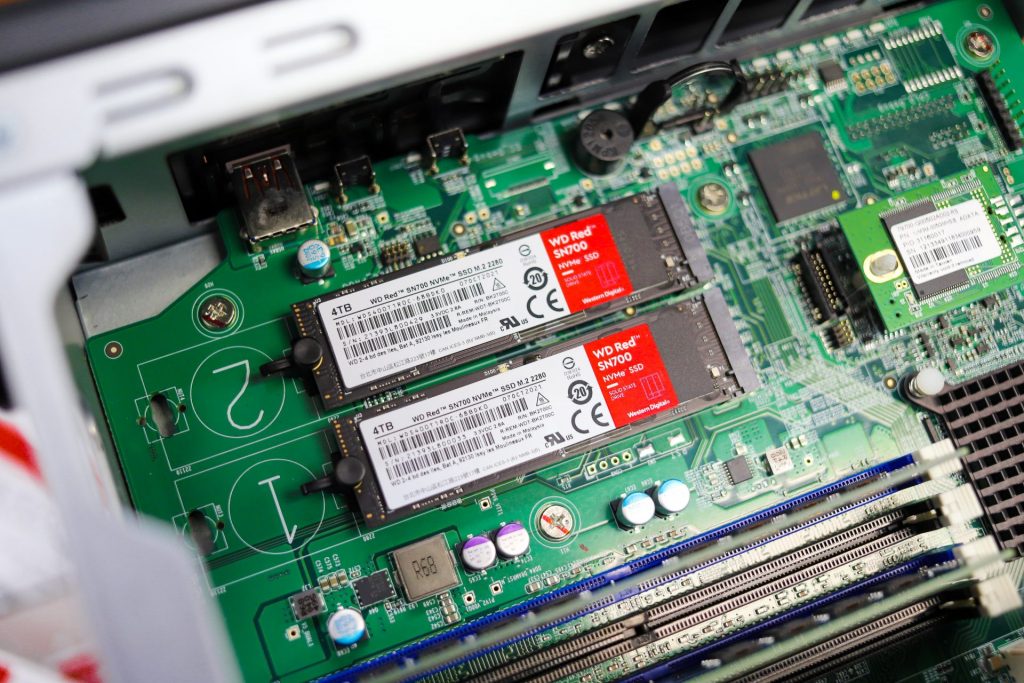 WD adds the SN700 (4TB) to their new WD Red portfolio of storage solutions. Other drives in this portfolio include the WD Red Pro HDDs, WD Red SATA SSDs, WD Red Plus, and a few others. The drive that was sent to us was the maximum capacity WD Red SN700 drive at 4TB. However, WD also offers the SN700 in 250GB, 500GB, 1TB, and 2TB. The 4TB model, along with the others, is now available from Amazon and select other distributors. The prices range from $79.99 for the 500GB drive up to $479.99 for the 4TB SN700 under review. 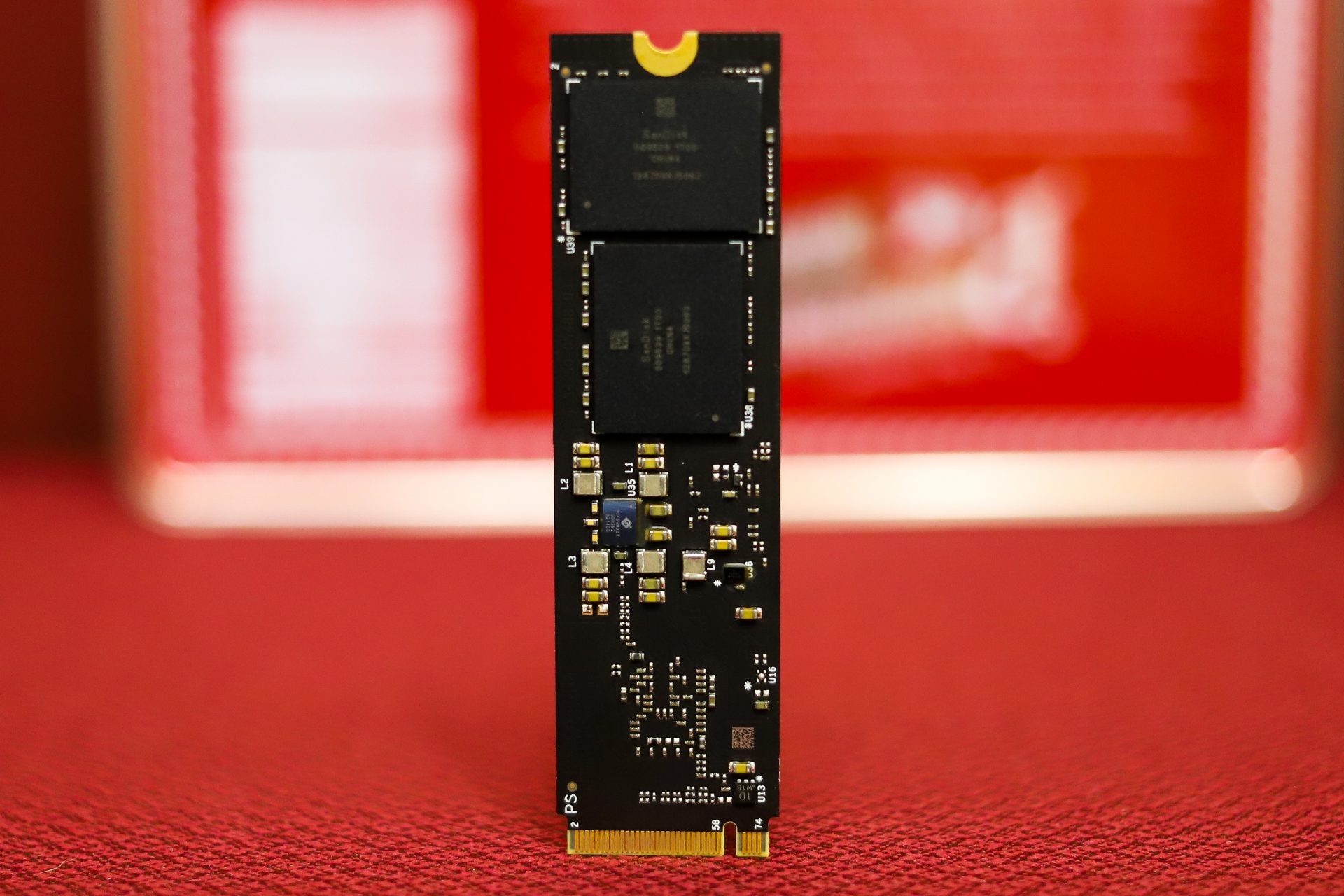 As we migrate into testing newer NVMe Gen4 SSDs, it required a platform shift in our lab to support the newer interface. We’ve also been migrating newer NVMe Gen3 SSDs to the same platform for better apples-to-apples comparisons between drive generations. For these reviews, we leverage the Lenovo ThinkSystem SR635 server, equipped with an AMD 7742 CPU and 512GB of 3200Mhz DDR4 memory.

NVMe is tested natively through an M.2 to PCIe adapter card in the edge-card slot, while U.2 drives are loaded in the front. The methodology used better reflects end-user workflow with the consistency, scalability, and flexibility testing within virtualized server offers. A large focus is put on drive latency across the entire load range of the drive, not just at the smallest QD1 (Queue-Depth 1) levels. We do this because many of the common consumer benchmarks don’t adequately capture end-user workload profiles.

When it comes to benchmarking storage devices, application testing is best, and synthetic testing comes in second place. While not a perfect representation of actual workloads, synthetic tests do help to baseline storage devices with a repeatability factor that makes it easy to do apples-to-apples comparisons between competing solutions. These workloads offer a range of different testing profiles ranging from “four corners” tests, common database transfer size tests, to trace captures from different VDI environments.

All of these tests leverage the common vdBench workload generator, with a scripting engine to automate and capture results over a large compute testing cluster. This allows us to repeat the same workloads across a wide range of storage devices, including flash arrays and individual storage devices. Our testing process for these benchmarks fills the entire drive surface with data, then partitions a drive section equal to 5% of the drive capacity to simulate how the drive might respond to application workloads. This is different from full entropy tests which use 100% of the drive and take them into a steady state. As a result, these figures will reflect higher-sustained write speeds.

Switching over to sequential workloads, the new SN700 drive had higher IOPS than the Synology SVN3400-400GB and the Seagate IronWold 510 1.92TB. Here, the SN700 had sub-millisecond latency performance throughout with a peak of 2,850MB/s and 692µs latency, placing it first in MB/s by a large margin.

On the sequential write, the SN700 performed with higher MB/s than the comparables. The drive peaks at 500MB/s and 214µs latency, placing it in comparison with the comparables.

Moving on to our Oracle Workloads, the WD Red SN700 continued with a very low latency throughout the tests. For the Oracle workload profile, the drive peaked at 85,423 IOPS with a latency of 418µs.

Now, we switched over to our VDI clone tests, Full and Linked. For VDI Full Clone Boot, the SN700 peaked at 104,207 IOPS at a latency of 319µs just before dropping off slightly.

Finally, the VDI LC Monday Login, the SN700 showed worse performance than the comparables, ending with a peak of 8440 IOPS and a latency of 1653µs.

To measure the performance of the WD Red SN700 in a more real-world scenario we loaded two of the 4TB NVMe SSDs into a QNAP TVS-h1288x NAS running the QTS OS. We then made a RAID1 disk group on the two SSDs to provision a volume for SMB shares and iSCSI LUNs. The purpose of these tests are to show more real-world conditions, including the aspect that network connectivity will play a bigger role than NVMe interface for the primary bottleneck.

Our enterprise shared storage and hard drive benchmark process preconditions each drive into steady-state with the same workload the device will be tested with under a heavy load of 16 threads with an outstanding queue of 16 per thread, and then tested in set intervals in multiple thread/queue depth profiles to show performance under light and heavy usage. Since NAS solutions reach their rated performance level very quickly, we only graph out the main sections of each test.

Our Enterprise Synthetic Workload Analysis includes four profiles based on real-world tasks. These profiles have been developed to make it easier to compare to our past benchmarks as well as widely-published values such as max 4k read and write speed and 8k 70/30, which is commonly used for enterprise drives.

Compared to the fixed 16 thread, 16 queue max workload we performed in the 100% 4K write test, our mixed workload profiles scale the performance across a wide range of thread/queue combinations. In these tests, we span workload intensity from 2 thread/2 queue up to 16 thread/16 queues. In throughput, the SN700 was fairly flat in SMB starting at 13,750 IOPS and ending at 38,500 IOPS. There was a big improvement from beginning to end in iSCSI with a start of 13,750 IOPS and an end at 193,000 IOPS. 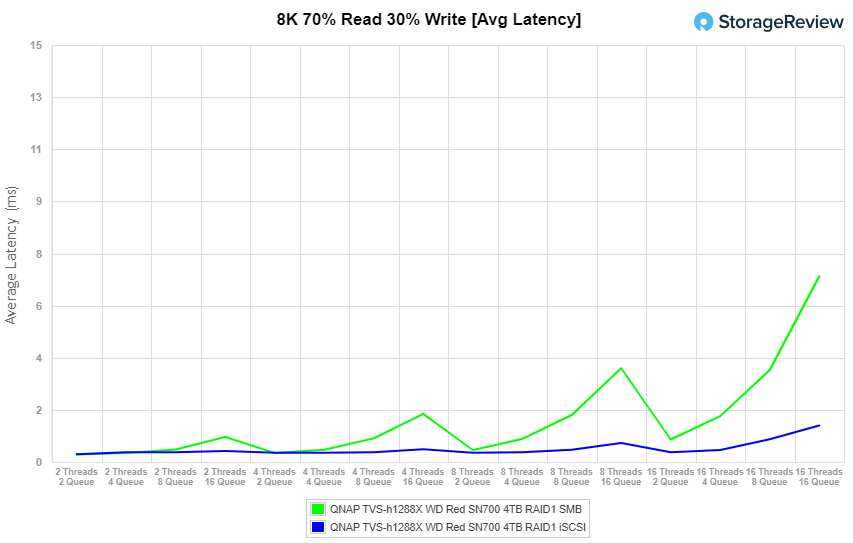 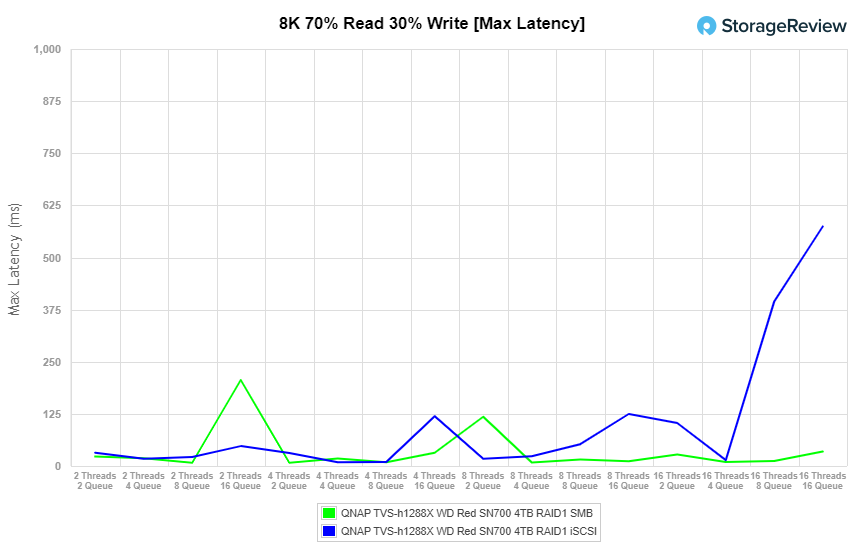 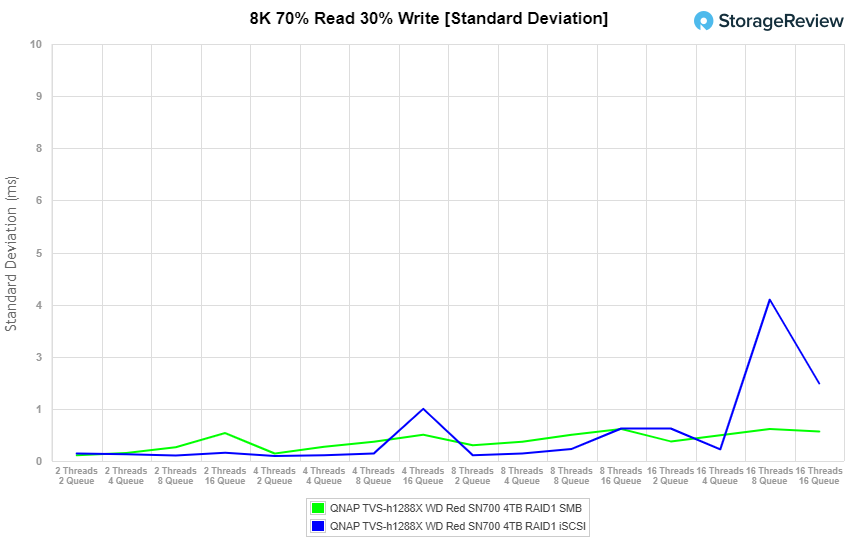 The WD Red SN700 is the newest SSD to come to the WD Red line-up. The drive was designed to accelerate a NAS with robust system responsiveness and exceptional I/O performance. For performance, we ran VDBench and Enterprise tests. The SN700 showed pretty solid results, placing first in nearly every test compared to the other drives that we benchmarked along with it in this category. WD brought a lot to the table with the SN700 and showed it didn’t need the Gen4 interface yet for its intended use case. 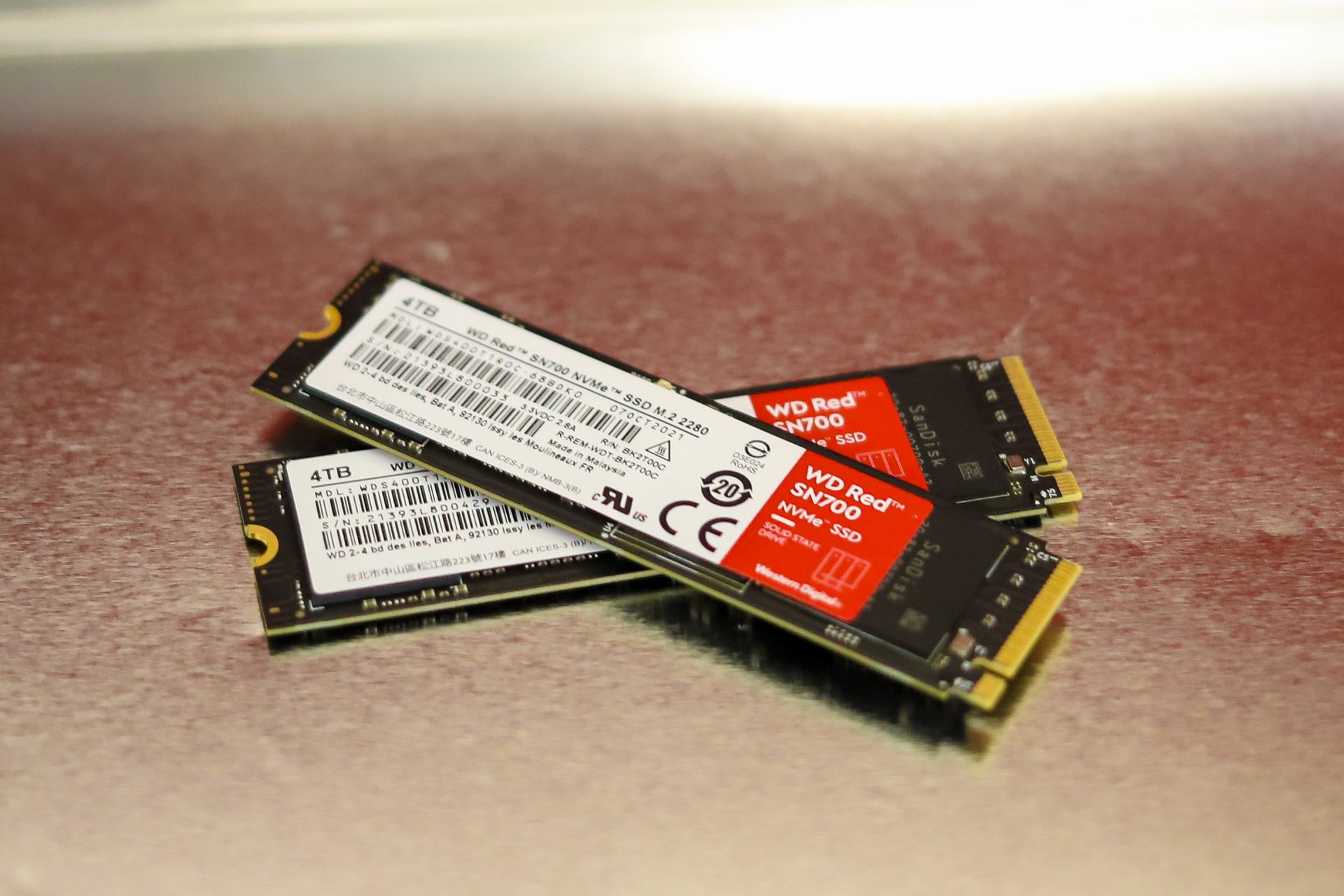 Overall, the WD Red SN700 is a solid choice when it comes to an SSD that can accelerate shared storage. This is important with use cases in mind like virtualization, database storage, concurrent access, and collaborative editing. The SN700 would be a solid choice to put inside of an NVMe-capable NAS for caching, tiering, or dedicated storage needs.