The TerraMaster F4-421 ($459.99) is a four-bay network-attached storage device designed to handle small-to-medium business storage needs. It’s relatively easy to install and will accommodate up to 64TB of (internal) storage with multiple RAID options, and it’s equipped with dual LAN ports with link aggregation, dual USB ports, and an HDMI port. That said, it lacks the multi-gig LAN ports and the extensive app library that you get with our Editors’ Choice for multi-bay NAS drives, the $429 Asustor AS5304T.

The F4-421 looks nearly identical to the F5-422, the main difference being that it’s a four-bay NAS while the F5-422 contains five drive bays. The silver aluminum alloy enclosure measures 5.3 by 10.9 by 8.8 by inches (HWD) and has four front-mounted removable drive sleds that require tools. It also has a small panel with a power button and LED indicators for all four hard drives, USB connectivity, and power. Around back are two Gigabit LAN ports that support link aggregation, two USB 3.0 ports, an HDMI port, a reset button, and a power jack. There are no multi-gig ports here like you’ll find on the Asustor AS5304T and the F5-422.

The F4-421 can be populated with 3.5-inch and 2.5-inch SATA HDD drives, as well as 2.5-inch SATA SSD drives. As with most of the NAS devices we review, you’ll have to supply your own storage drives. The NAS has a maximum internal storage capacity of 64TB and supports drive hot-swapping, and several  RAID configurations are available including Single, RAID 0, RAID 1, RAID 5, RAID 6, RAID 10, and JBOD. Supported file systems include BTRFS and EXT4. 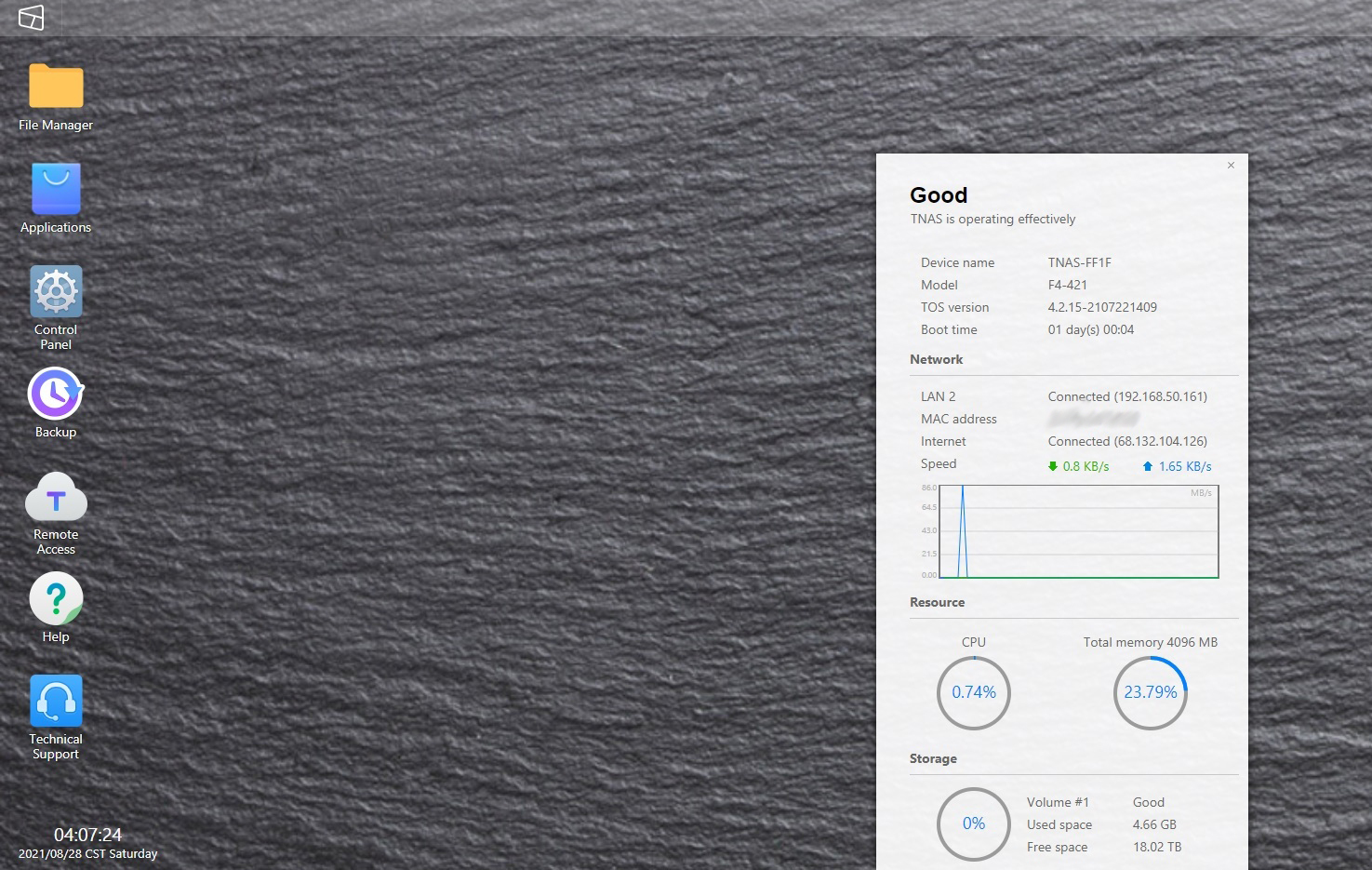 You manage the F4-421 using the TerraMaster TOS operating system, which has a Windows-like interface that makes it easy to create volumes, assign permissions, back up data, and more. When you first launch the program, you’ll see a desktop screen with tiles for File Manager, Applications, Control Panel, Backup, Remote Access, Help, and Technical Support. There’s also a resource monitor panel off to the side that shows current CPU and memory usage, as well as storage capacity. The File Manager is where you go to create new folders and upload data, and the Backup tile opens a screen where you can back up data using Rsync Backup or Time Machine. Here you can also create backup schedules. 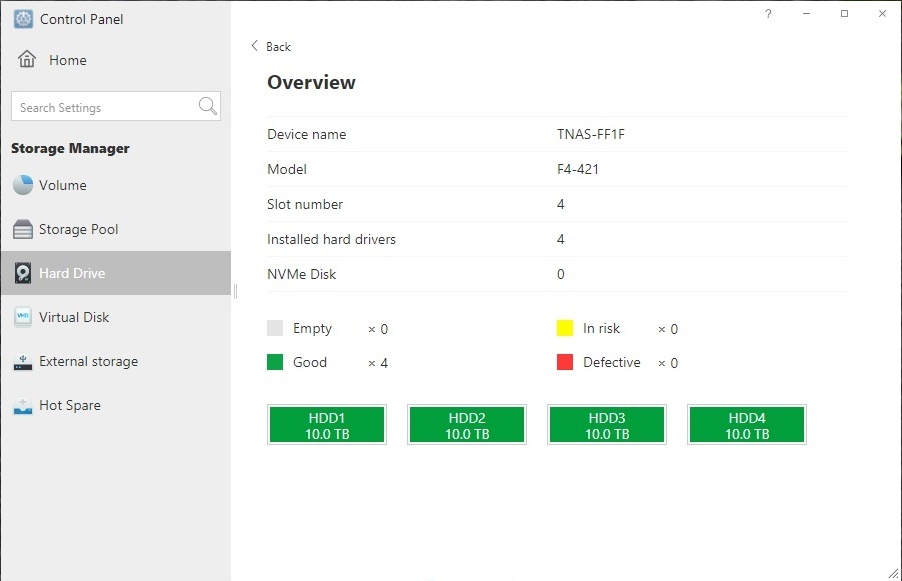 Tap the Applications tile to access the TerraMaster app library, which contains apps that make it easy to press the NAS into service as a backup and restore device, a media server, a web server, a cloud server, and more. The library currently contains up to 88 various security, business, and home entertainment apps, which isn’t a lot compared with the more than 280 apps that you get with the Asustor AS5302T. 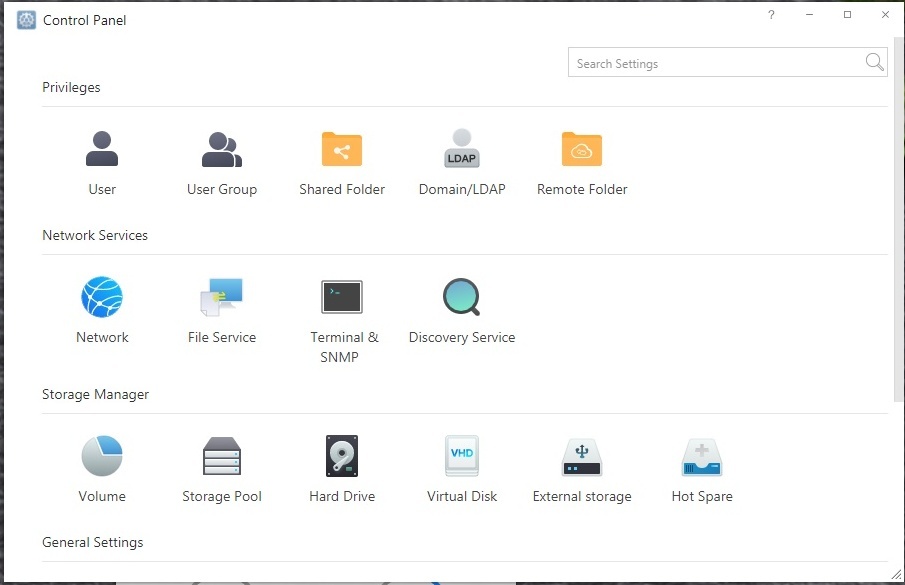 As with the TerraMaster F5-422 and F2-210 models, the F4-421 was easy to get up and running and can be installed using the TNAS desktop PC utility or the mobile app. I chose the former, downloaded TNAS PC utility to my desktop PC, and installed four 10TB Seagate Iron Wolf drives using the included screws and screwdriver. I connected the NAS to my router, powered it up, and launched the TNAS utility. The drive was immediately recognized, so I tapped Login, created a user name and password, and initialized the drives using the default setting, which selected RAID 6 with a total storage capacity of 18TB. After 30 minutes the drives began synchronizing, and were ready for testing after 14 hours.

The F4-421 was extremely quiet and turned in respectable speeds on our file-transfer tests, in which we transfer a 4.9GB folder containing a mix of music, video, photo, and office document files between the NAS and a desktop PC connected to the same network and record the write and read speeds.

If your small-to-medium business is in need of a backup storage solution, the TerraMaster F4-421 is worth a look. It’s a four-bay NAS that’s easy to install and comes with a user-friendly operating system that makes it to easy to press into service as a media server; a repository for documents, photos, and video; a mail server; and more. The F4-421 delivered solid file-transfer performance in our tests and offers several RAID configuration options, but our Editors’ Choice for multi-bay NAS drives, the Asustor AS5304T, offers faster performance and a few more features including multi-gig LAN, a tool-less chassis, and a much larger library of apps.

Have the Synology DiskStation DS920+ on a shortlist? Save $110 right now!