Review: Synology DS-1618+ network attached storage device is the best kind of overkill for most | AppleInsider


More people than ever are working from home, and local-area network storage needs aren’t going down. Don’t cheap out on a low-end network storage device, and get the Synology DS-1618+ to set you up for the future.

If you have one computer, with one user, doing one task, then the storage space you have or can easily add externally is probably sufficient. But as computers, users, or tasks multiply, so does storage. Add in any kind of large file storage need, like accumulation of videos, and it can get out of hand quickly.

Sure, you can keep adding external drives through RAID enclosures like we have, but that can get unwieldy if you have a lot of data and that’s aggravated by multiple users or computers. Cataloging what’s on which drive can be a pain too.

We’ve said it before — we like home servers, and we like the Mac mini for that task. But we also like network attached storage devices (NAS), a device we can sit in the corner, and just let it serve files.

But, it’s all too easy to buy a network attached storage device that doesn’t have enough power for the future, and have to re-buy. This increases cost, and potentially induces a migration nightmare.

Buy what you need from the start of the project. Get something like Synology’s DS-1618+ — which we’ve been using for some time now.

The DS-1618 is plain. It is a black box, specifically designed to sit unobtrusively in a (well ventilated) area of an office. You don’t really want this to be in your office near your workstation or a bedroom with an office space because of noise — but more on that in a bit.

The unit gives the user six bays to add 3.5-inch hard drives, or 2.5-inch SSDs too — but we recommend the former for cost and data density reasons. If this isn’t sufficient, two DX517 expansion chassis can be installed and easily added to the existing RAID through the pair of eSATA ports on the back of the unit.

The DS-1618+ has three USB 3.1 type A connections for expansion, or to back up the entire RAID, assuming you have a large enough external array to hold the contents of the NAS. If you’re so inclined, you can connect a powered USB-A hub to any of these ports for backup or other expansion. And, if you need to, you can connect a USB-only printer to the Synology to turn it into a network printer.

Networking is provided by four Gigabit Ethernet ports, with the unit having support link aggregation — in essence, with some routers, you can use all four ports to increase incoming and outgoing bandwidth. But, this can get expensive, as only some routers support it. Besides, in the home office or small business set up with the unit having hard drives, this is overkill.

Extra expansion possibilities are opened up by a PCI-E x4 expansion slot. You can’t just jam any old PCI-E card in there, but Synology does have a list of compatible cards that give the unit things like 10-gig Ethernet, fiberoptic networking cards, SSD caching for faster random access to things like databases, and the like.

Most users won’t need to use this slot for anything. But, it is a good inclusion for the future. The Mac mini has a 10-gig Ethernet option, and the iMac Pro and Mac Pro have it by default. Routers and network switches capable of the speed are coming down in price, and in the next few years, they will become more ubiquitous.

The whole package is powered by an Intel Atom C3538 CPU, with 4GB DDR4 RAM standard. RAM is expandable to 32GB with two SO-DIMM RAM slots on the underneath of the machine. More on this, and why and when you’d want more RAM in a network peripheral in a bit, though. 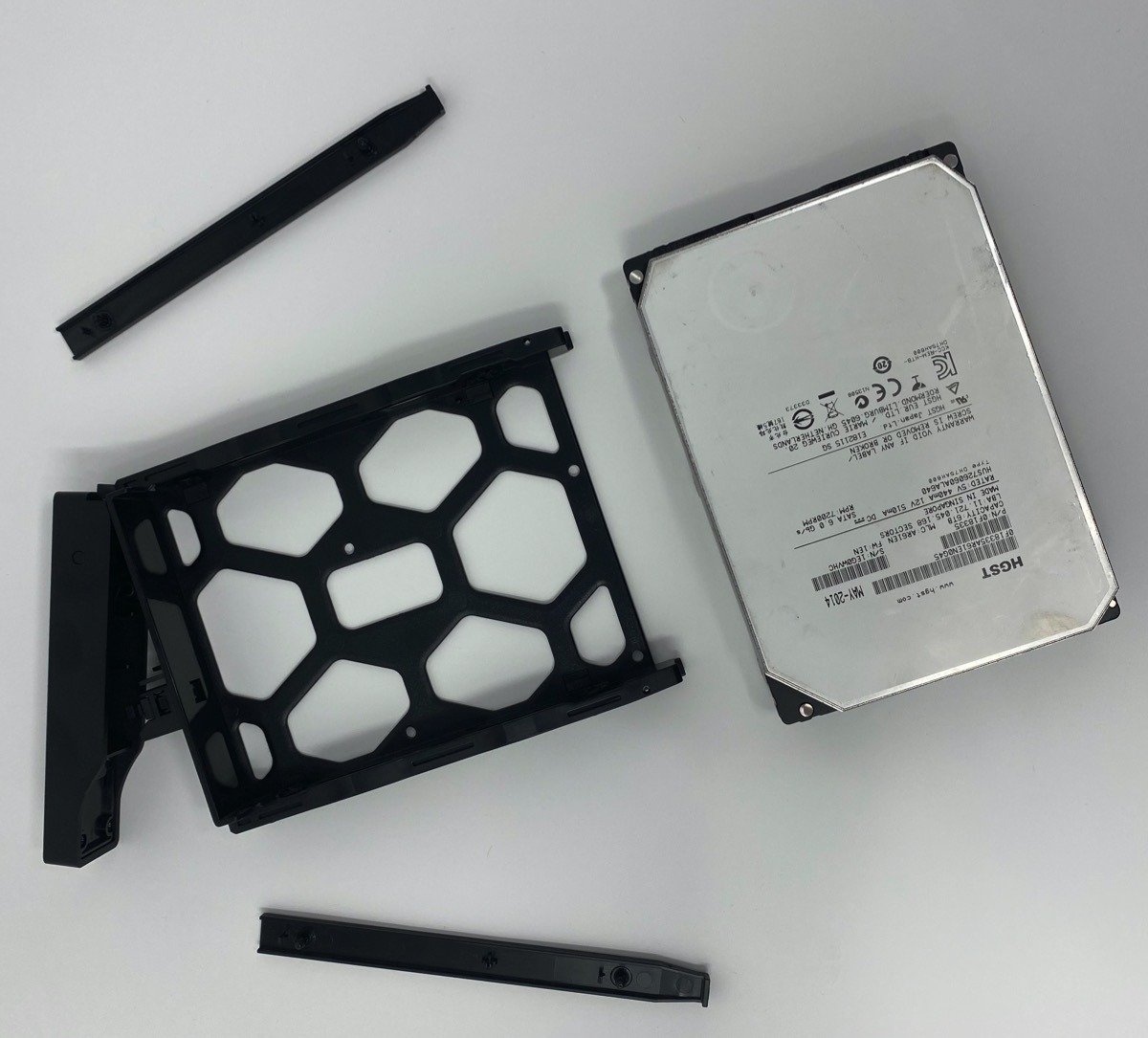 The chassis is metal and well-engineered. Drive trays are tool-less, beyond the key that’s included in the system to pop the tray out.

Two plastic rails hold a drive firmly in place in the mostly-metal tray. The tray then slides in, and with the level lock on the tray, there is no doubt that you’ve made a good mechanical connection to the SATA drive connector in the NAS itself. 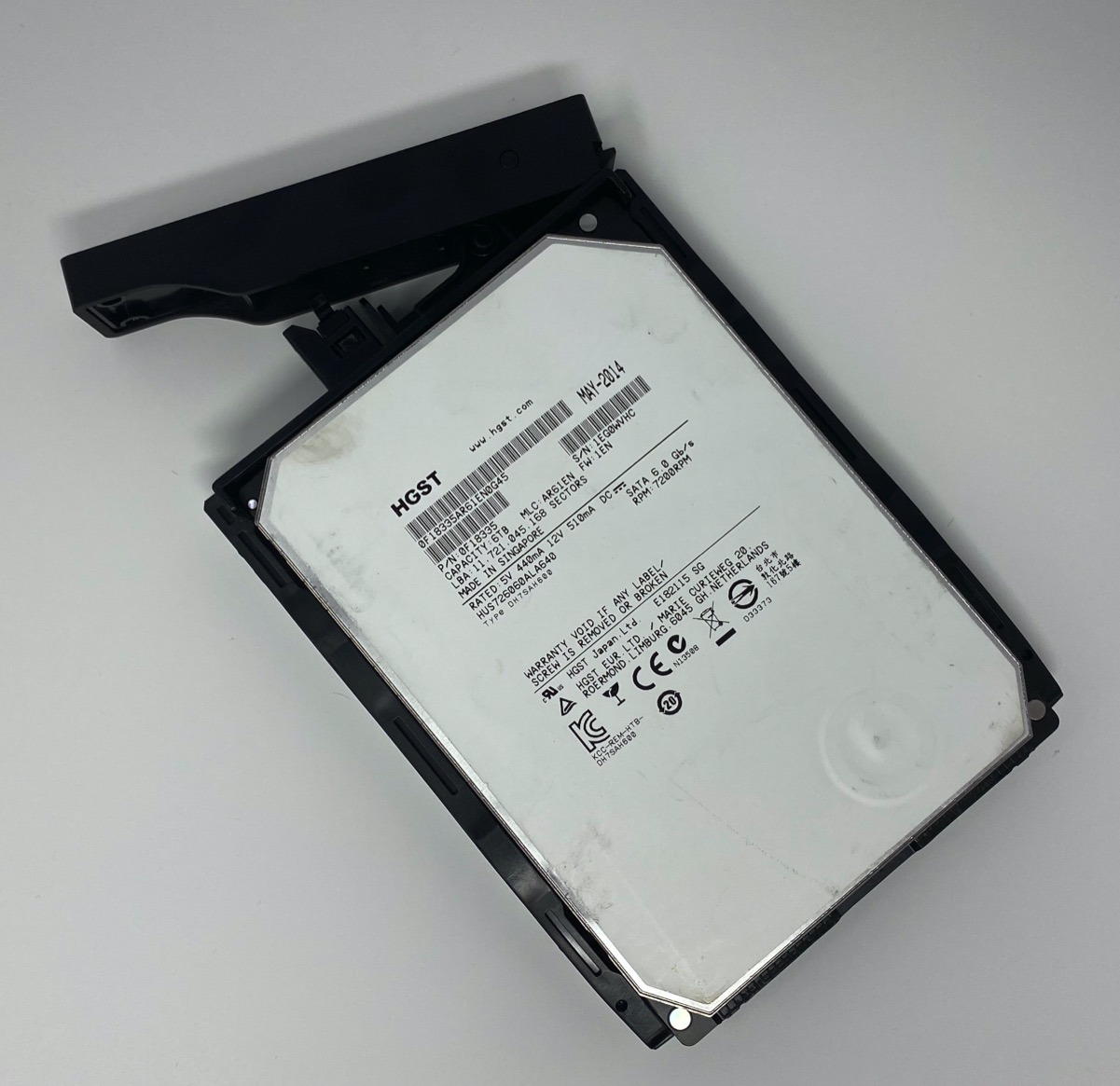 Drive tray assembled and ready to get installed

But, in operation and under load, we’d like it to be a little quieter. Under full I/O and CPU load, the unit doesn’t vibrate, but between fan noise and drive noise, it hits 61 dBa at three feet from the enclosure.

It is replete with LEDs and incredibly blinky when in use. This is expected, given that it has up to six hard drives, and is important to be able to see at a glance if everything is functioning okay. But again, you probably don’t want it physically near your workstation.

Setup is about the easiest we’ve ever seen for a network attached storage device. The first step is to load up the device with drives. Synology makes it easy to see in advance how much storage you’re going to get from the unit with a tool where you can virtually load it up and see what you get — and we highly recommend fiddling with this before you buy drives. 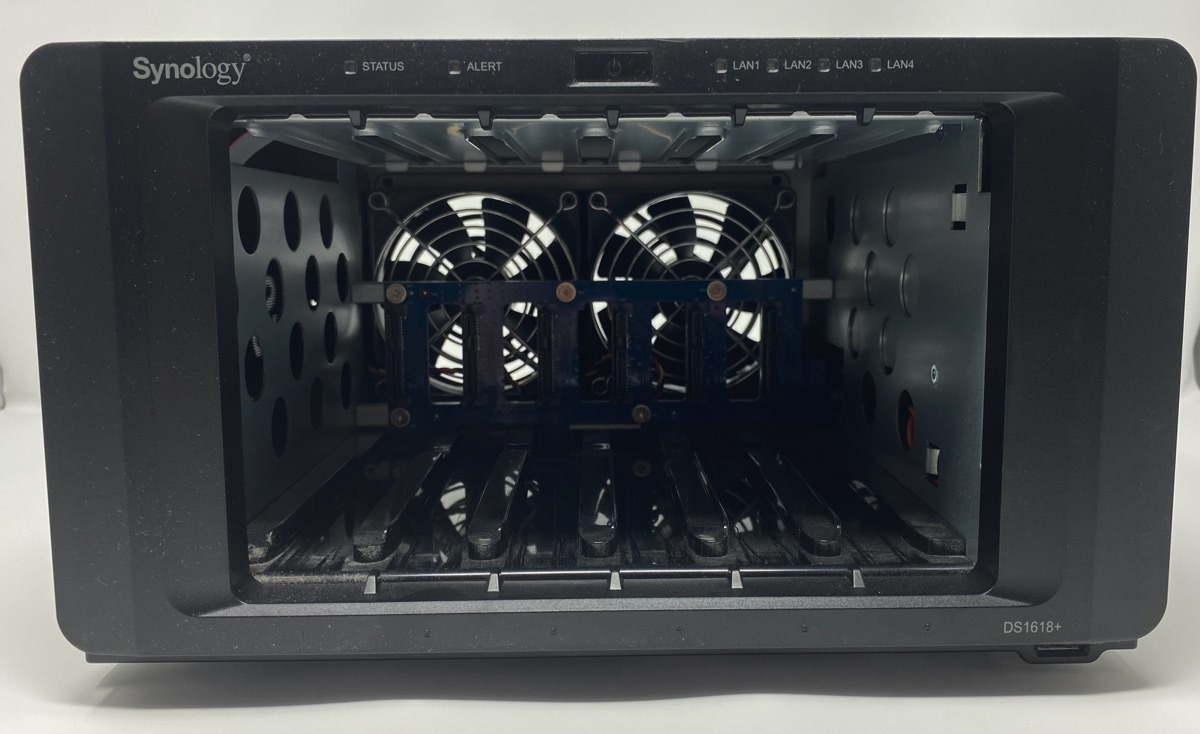 Synology has a list of recommended drives for the unit, and as a general rule, we do recommend adhering to those. That said, in the courses of our testing, we’ve used an assortment of drive sizes and manufacturers, and found that heat and data transfer consistency changes little.

Synology also has an online tool so you can see what you’re getting into for DSM software setup before you really get going. After you’ve taken a look at that, and following the drive installation, plug it into power, and use Safari or other browsers to go to find.synology.com. 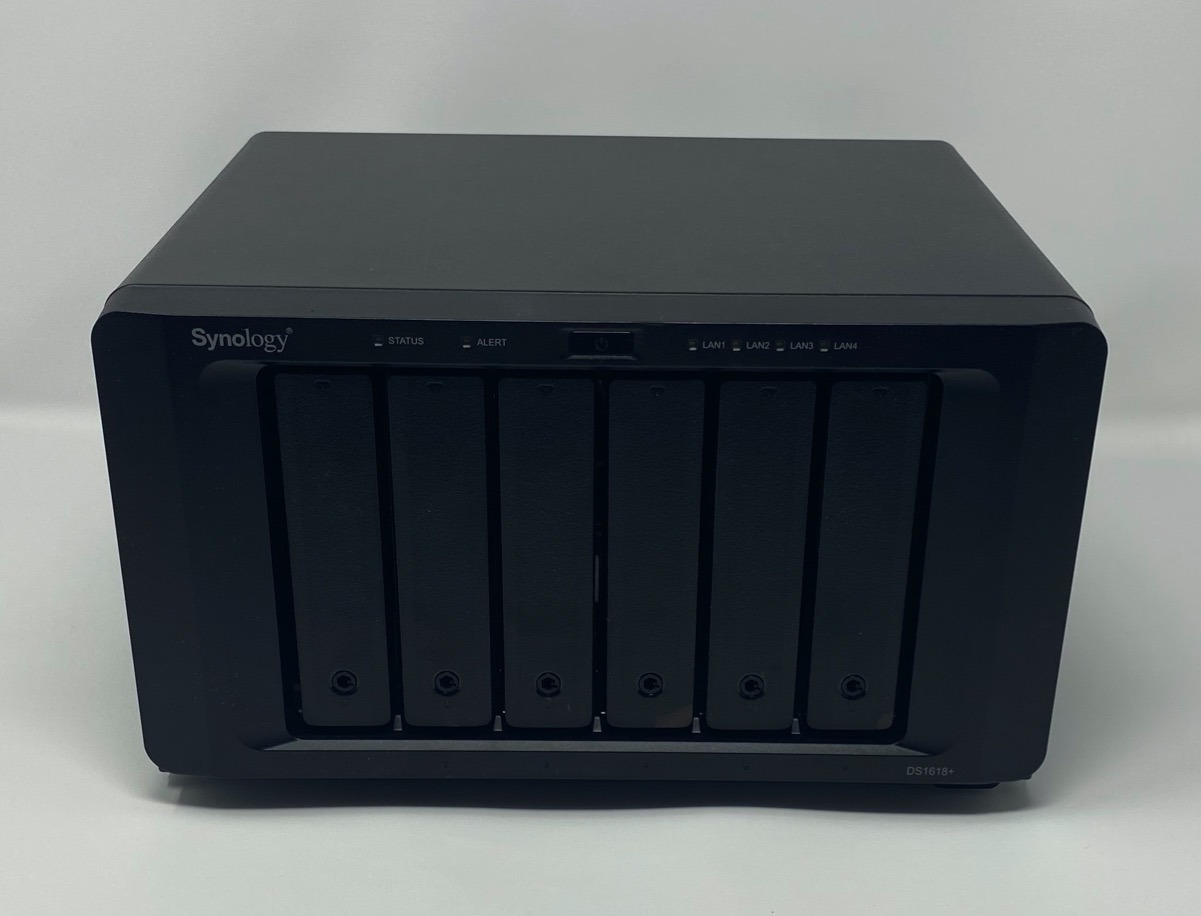 This loads up the configuration page for the device, lets you set up an administrative user, and format the drives in the unit. Synology and AppleInsider recommends Synology Hybrid RAID for flexibility. It also supports RAID 0, RAID 1, RAID 5, RAID 6, RAID 10, RAID 50, RAID 60 in hardware — but the drive requirements for each are left as an exercise for the reader.

After formatting, the interface has you configure the basics of file sharing. Using a URL that Synology provides that the NAS itself keeps up to date with your internet-facing IP address, you can also access your files and some of your services outside of your home network, all secured by encryption and password.

We have seen some probing from the Internet, looking for a Synology. The basic security is robust, assuming you’re using best practices for user and password selection. And, this is enhanced by notifications — the DSM will block IP addresses that hammer on the NAS looking for access automatically, and it will email you that it has done so, if you’ve configured it appropriately.

Under the basic configuration of DSM, file sharing is basic SMB — but this can be tailored to a ridiculous extent. Not only can you add additional services like SFTP, BitTorrent, and the like, times of file availability can be selected, you can lock down specific folders with a password, and you can prevent certain folders from being seen by a user at all.

Synology’s DSM also allows for full-drive AES 256-bit encryption without a large amount of performance loss. But if you do this, don’t then use the machine for anything that needs any notable processing horsepower. You can upgrade the RAM, but you can’t upgrade the processor.

The use of the device goes so much deeper than this, though.

What do I want a network attached storage device for, anyway?

Beyond just serving files, a network attached storage device like the Synology DS-1618+ has an expandable ecosystem, very similar to Apple’s App Store. Software can be added to extend the usability of the device — and you can even install Windows on it. 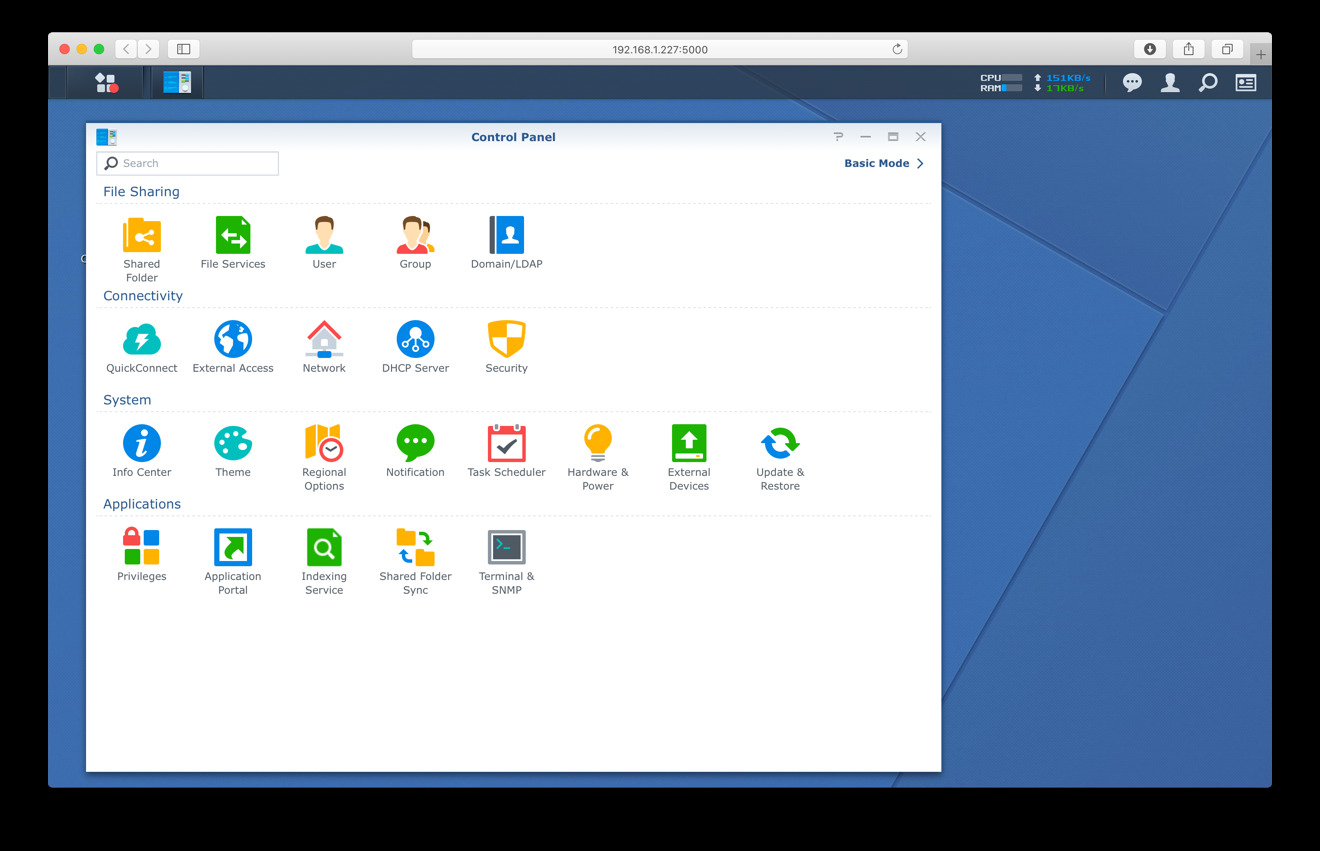 For most Apple Mac and iPad users, the most usability beyond SMB file sharing will come from an integrated iTunes sharing package, which is easily configured through the web-based interface. Additionally, it can be set up as network Time Machine targets, even for Macs running macOS El Capitan and older with AFP services.

Other software available for the unit include a Plex server, built-in DLNA video streaming, and integration with Dropbox and other cloud-based storage services.

Regarding that video streaming, though — if you use the iTunes server, all of your videos and music need to be encoded properly for iTunes. Basically, you’re front-loading all the processor work that needs to be done for a video, and keeping that work off the NAS itself.

Services like Plex will transcode just about any media format on the NAS prior to streaming, but this takes some effort from the hardware. This is commonly where lesser NAS devices fall down.

In our testing, we consistently can stream three 1080P videos simultaneously with no dropped frames. But, it will only realistically manage one 4K stream, and the enclosure’s fans are very, very loud during the process.

The DS-1618+ also comes with a two-user license for IP-based cameras, to use the unit as the core of a network-based surveillance system. Up to 40 cameras are supported, at additional cost.

As you add services and load, that 4GB of RAM in the unit is consumed very rapidly. It uses virtual memory like every other modern computer does, but as that footprint increases, performance drops. We didn’t run into this when running a Time Machine backup, an iTunes server, and regular file service. When we added a Plex server, we started seeing some performance hits even before we started streaming anything.

So, if you’re going basic, 4GB is probably enough. But, if you plan on running a lot of services, get more RAM. We put 16GB in our unit and didn’t hit any more performance issues induced by low RAM.

Buy what you need for tomorrow, not today

The DS-1618+ is not inexpensive. It is Mac mini-priced, if you’re looking to stay inside the Apple ecosystem for your server needs.

From a price perspective, you’re looking at $799 for either the DS-1618+ or the Mac mini on the low-end, assuming you’re using the 2018 Mac mini. Drive prices vary, depending on what you pick up, but $100 per 4TB isn’t an unrealistic estimation. On top of that, for the Mac mini, you’re looking at $200-ish for a USB 3.2 type C enclosure with the limited macOS software RAID options, and much more if you want hardware RAID support — unless you just want four drives in individual enclosures laying about.

From a performance standpoint, that Mac mini home server is more flexible overall, and more powerful. However, it is also more expensive when you consider those additional expenses, and in some respects, not as easy to set up for network services. And, that PCI-E slot for expansion of the NAS is nice.

In a home with low network storage needs or an office that sees a basic need but isn’t sure where to jump in, the Synology DS-1618+ is overkill. But, as you start adding things like media serving and the like, plus the inevitable creep of what you offload onto a NAS once you get started, the unit is a cost-effective way to get a powerful storage solution not just for now, but for the future as well.

Importantly, though, don’t get complacent with backup. It is far too easy to get a NAS in your office and consider yourself safe. A single-facility failure, say, an office fire, will still wipe out all of your data, if you don’t have some sort of off-site backup.

There are certainly cheaper network attached storage units, but they are easy to outgrow. The 1618+ is an excellent, and expandable, starting point.

The Synology DS-1618+ sells for $749 at your choice of retailers, including Amazon, B&H and Adorama.